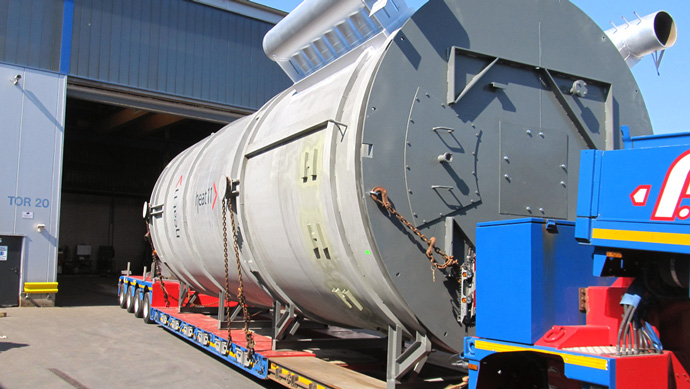 heat11 sends a boiler to the »Noor Ouarzazate« Solar Complex

The boiler is used in the parabolic trough solar power plant »Noor II« in Morocco as so-called »night heater« or »anti-freeze heater«. That means the boiler heats the solar field and the entire HTF-loop in the night and during longer standstill times when the temperature in the solar field threatens to fall below the freezing point point of the heat carrier (+12 °C).

The boiler was designed as a maintenance-friendly bottom-fired construction which also reduces the otherwise necessary steel construction to a minimum (see illustrations).

Besides boiler, chimney, burner and dust collector (»sand-trap«), the heater plant comprises also the complete control system which is installed in an air-conditioned container.

Phase one construction works started in August 2013 and Noor I was officially commissioned in February 2016. Noor II and Noor III are scheduled to start commercial operations in 2017 and 2018, respectively.

The project is being developed on a build, own, operate and transfer (BOOT) basis by ACWA Power Quarzazate, a consortium of ACWA Power, the Moroccan Agency for Solar Energy (Masen), Aries and TSK.

The solar complex will be operated and maintained by a consortium led by NOMAC, a subsidiary of ACWA Power, and Masen.