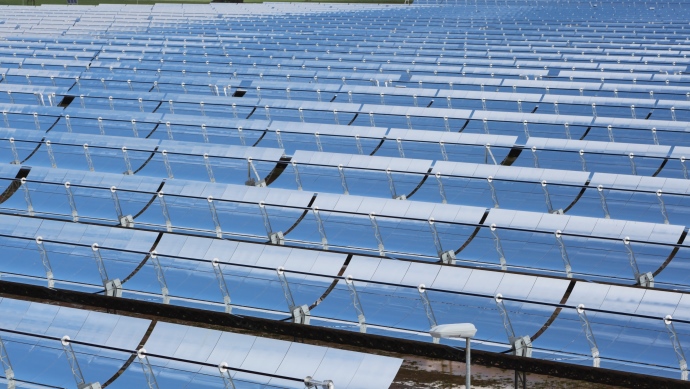 At the edge of the Sahara, in Ouarzazate, Morocco is currently building one of the world’s largest solar power plant complex. The name of the project is “Noor”, Arabic for „light“, with which Morocco wants to get more independent from imported energy sources such as gas and coal. In the realization of the project the Bielefeld company heat 11 GmbH & Co. KG is also involved. The process heat specialists recently got the order for the delivery of a heater for the heat transport system of the solar thermal power plant Noor II.

The Government of Morocco pursues an ambitious energy strategy: By 2020, the capacities of sun energy, wind power and hydropower should be expanded to 2.000 megawatt each. The proportion of the installed electricity generation capacity based on regenerative energies will then be 42 %. Even beyond the region, the country is thus a pioneer in regenerative energies. An important milestone in this strategy is the power plant complex “Noor” which is about 10 km northeast of the Moroccan town of Ouarzazate and will generate electric power for about 1.3 million people after completion. Compared to the conventional power generation, about 800.000 tons of CO2 emission will be avoided annually.

The power plant complex will consist of four independent plants and dispose of an electric capacity of around 550 megawatt. Three innovative solar technologies are used: The parabolic trough power plant technology (Noor I and II), a solar tower with heliostats (Noor III) as well as the photovoltaics (Noor IV). Estimated costs for the project are approximately 1.8 billion Euro. Important financing partners of the Moroccan MASEN (Moroccan Solar Energy Agency) are the German KfW-Bankengruppe (banking group), the French Agence Française de Développement (AFD), the African Development Bank (AfDB), the European Investment Bank (EIB), the European Union (EU) and the World Bank.

The constructions for the first power plant „Noor I“ started in June 2013, “Noor II” has been under construction since 2015. For both power plants, the solar radiation is focused by parabolic reflectors onto an absorber pipe in which thermal oil circulates as heat transfer medium. The heated oil is used to generate steam by a heat exchanger which generates power via a steam turbine – as in a conventional power plant. The plants are equipped with a molten salt storage which stores the heat efficiently, thereby enabling power production even after sunset. Power plants with this technology are already working among others in the United States and Spain – with technology of the East Westphalian heat transfer specialist heat 11.

“The thermal oil heaters we developed ensure a smooth operation of the heat transport system of a solar thermal parabolic trough power plant.” explains Dr. Dietmar Hunold, managing partner of the company based in Bielefeld. “On the one hand they effectively prevent the heat transfer liquid from freezing, on the other hand they serve a controlled start-up of the power plant before sunrise and can improve the capacity of the power plant even in times of reduced solar radiation.”, continues Hunold.

The plant for Noor II to be supplied by heat 11 has a thermal capacity of around 15 megawatt. The boiler used is about 15 m high and 3.5 m in diameter. The scope of supply includes not only the boiler, burner and chimney, but also the required control systems as well as the monitoring of construction and installation work plus the commissioning of the plant in Morocco.

The plant for the power plant Noor II in Morocco is already the third order which heat 11 has received in the section of solar thermal power plants. Previously the Bielefeld engineers already supplied systems for the now working Spanish parabolic trough power plant “Extresol 3” and “Los Arenales“.

Heaters for solar thermal power plants are a part of the heat 11 range of products in the field of renewable energies which also includes plants for the production and treatment of heat, electricity and gas from biomass. “heat 11 belongs to the most innovative suppliers,” says Juan Moises Cuestas, sales director at heat 11. “The new order and many additional inquiries and projects demonstrate once again that heat 11 with its partners makes an important contribution to realize climate-friendly, liable and economical solutions to meet the growing worldwide demand for energy.”