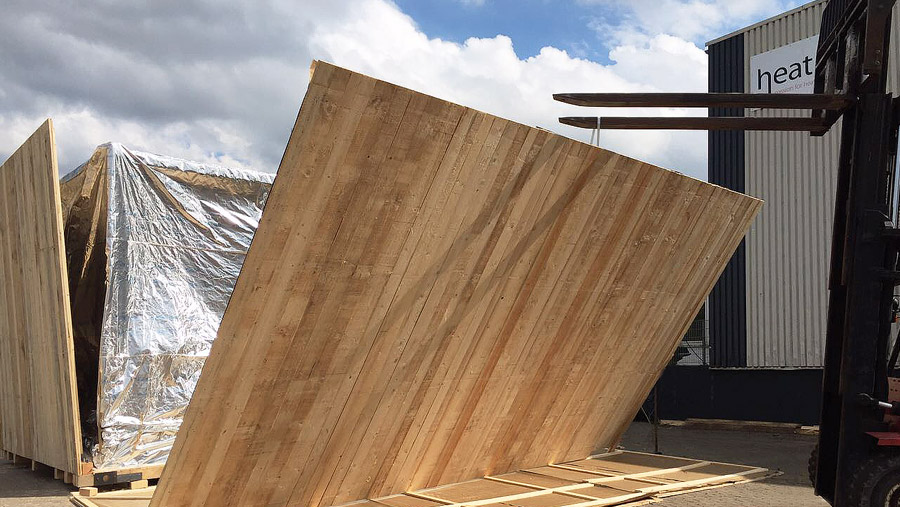 For the heating of the die plate and the screen changer, as well as for the gear pump temperature control of an extruder plant for the production of high density polyethylene (HDPE), heat 11 GmbH & Co. KG supplies two thermal oil plants (thermal oil heating and heating-cooling units) to a leading petrochemical company through their customer KOBE Steel.

Learn more about this project here:

Electric heaters for the HDPE production

A leading petrochemical company is constructing a plant for the production of polyethylene with particularly high density on the Gulf coast of the USA. read more

Already during the packing of the components, centimeter work was required: Both plant components packed in wooden boxes should reach their final destination in Houston, USA.

Afterwards, an 80-ton crane was installed in front of the production hall of heat 11 GmbH & Co. KG to load the plant components so that the plants finally waited for their pick up on two low-loader trucks.

With a total load of just above 13.000 or 20.000 kilogram, the delivery was rated as »Convoi Exceptionnel« and was only allowed to leave the »heat 11 manufacture« in Löhne with a certificate of exemption, under police escort and exclusively at night

For a transport with this dimension, the police have to suggest a route in advance to minimize the risk of accidents or the stopping of the convoy due to too narrow or too low sections of the route.

The transport company is specialized in very low loads. However, when checking the route proposed by the police from Löhne to the inland port of Hille, the company noticed that the intended route would not be possible.

On the route was a bridge, which missed the required height by two to three centimeters. As a result, the company made a proposal for a change of route to the police.

Departure to the inland port

On the evening of departure, however, the police did not bring this change of route so that they decided that the original route would be driven without any changes

As it turned out a few hours later, it was a decision with unpleasant consequences: The bridges were listed officially high enough to drive underneath with low-loaders, but when they head for one of the bridges, there was actually a very different image:

The transporters missed the necessary passage height only be few centimeters so that they had to drive backwards about 500 meters in the dark with their enormous dimensions in order to be able to evade the previously required alternative route.

The rest of the journey, however, ran smoothly: The inland port of Hille on the Mittellandkanal was reached in time after about 50 km of distance and about 4.5 hours of traveling time. The day after, the overseas port in Antwerp was reached.

There, the two plant components were loaded onto the »Grey Fox« – a ship with dimensions of 192 meter of length and 26 meters of width, booked specifically for the transport across the Atlantic ocean.

At present, the ship can still be followed on its journey.

After a nearly one-month trip on the high seas, the »Grey Fox« is expected to arrive in Houston on 22 September 2017.