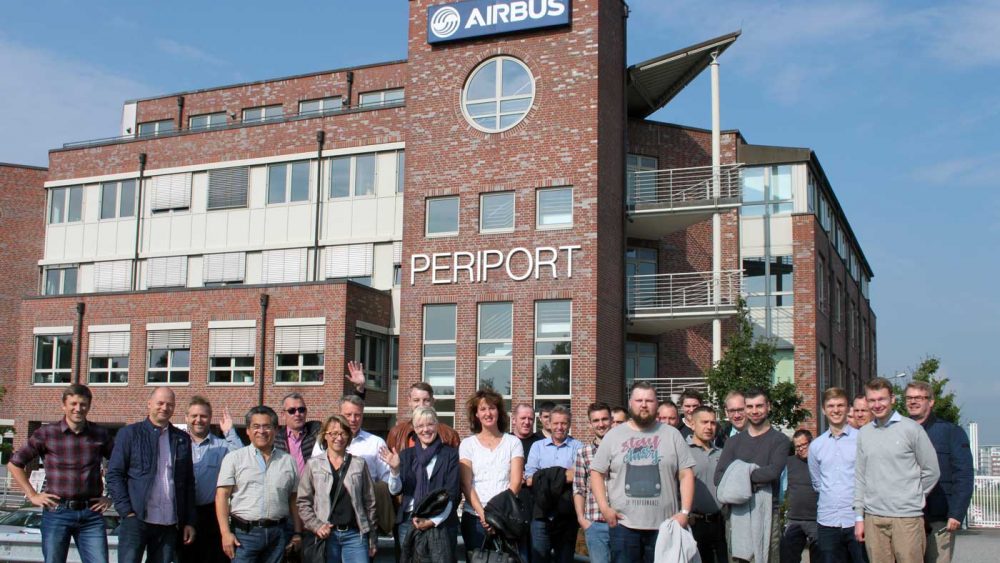 Last Friday, the time had come again: The annual highlight of the team spirit of heat 11 GmbH & Co. KG – the heat 11 TeamTour – was in form of an excursion. After a visit of the Meyer Werft (Meyer shipyard) and Lufthansa Technik, the production of Airbus in Hamburg Finkenwerder was next. The event had already been highly anticipated and eagerly awaited.

One aircraft per day

The location alone is impressive by its enormous dimensions: On an area of 370 hectares (about 340 football fields) 16.000 of the 66.000 European employees work here. The largest European aircraft manufacturer has founded its work on the peninsula on the other side of the Elbchaussee in 1970. Nowadays, at least one aircraft of the type A320 is completed per day. A logistical challenge that put high demands on the large-scale location.

It has the infrastructure and structure of supply of a small town. There is an own cogeneration plant, a water treatment plant, a fire department, a shipping berth including ferry connection to the other side of the river Elbe and six restaurants.

The A320, the »bread-and-butter« aircraft of Airbus, is completely finished here whereas the individual parts are developed by European teamwork:
The first third of the aircraft, that is cockpit and the front cabin, are produced in France and the rear two third in Germany. The tail plane is from Spain, the wings from Great Britain.

Rats on a plane

The A380, from 550 to 800 seats the world’s largest civil aircraft, should revolutionize the aviation. Its commercial success, however, has currently not yet begun: So far, 317 planes are ordered, 280 of them had been delivered. However, nearly 500 aircrafts sold will be needed until it is in the black. At a list price of USD 436 millions, Germany and France each account for about 38 % of the work and value added, 20 % in Great Britain and 4 % in Spain. A total of 17 months of production time are required for the construction of an A380, of which 72 days account in Hamburg.

It was particularly interesting to learn that each aircraft is equipped with a so-called »RAT« (Ram-Air-Turbine) but hardly anyone knows it. Its reason for existence is that the aircraft control system is fully electronically now. In case of an extreme that all engines fail and do not restart within a battery power supply of 25 minutes, the »rat« is used: The propeller is brought up between the engines and ensures that the aircraft can be maneuvered by the »wind«.

After 30 to 40 years of operation, the life circle of an aircraft comes towards an end. Airbus has specifically established a waste disposal program so that 85 % of the components of the worn-out aircraft parts are disposed in an environmentally sound manner.

The heat 11 TeamTour – each time something special

At the end of the site tour, the team of heat 11 GmbH & Co. KG was deeply impressed with the new insights. Now a »more pleasant« part was yet to come: The team made their way to the Hamburg city center for a joint dinner and an overnight. All were enthusiastic and in a great mood.